Founded in 1979, Artspace is a nonprofit organization whose mission is to create, foster and preserve affordable and sustainable space for artists and arts organizations. To fulfill that mission, Artspace uses the tools of real estate development to construct or restore places where artists can affordably live and work. Artspace buildings also support healthy communities, anchored in existing assets. With a commitment to affordability, Artspace ensures that the spaces remain accessible to artists and their families in perpetuity. Artspace’s unique portfolio, developed over three decades, includes more than 50 projects nationwide and represents more than $750 million invested in America’s infrastructure. Beyond developing places, Artspace has also served as a consultant to hundreds of arts communities coast-to-coast, helping others advance their visions. While embracing the value the arts bring to individual lives, Artspace has also championed the once-radical idea that artists living with financial hardship can leverage fundamental social change. Leading the national movement of artist-led community transformation, Artspace’s headquarters are in Minneapolis, with additional offices in New York and Washington D.C.

A major turning point for the family

Veronica Casares Lee and her husband, Patrick Lee, moved three times in three years after arriving in New Orleans as visual artists. The first small, shotgun home that they lived in was a disaster and Veronica was initially very depressed. The couple moved after just seven months, but had to pay even more at the next place, which also had steep utility bills and a difficult landlord. With the expensive cost of living, Patrick had to churn out heart ornaments to sell at the outdoor market—things that were guaranteed to sell, and which would allow them to support their children. “It’s a struggle when you have two kids, and you’re both artists,” Veronica explained. Finding the Bell Artspace Campus in New Orleans was a major turning point for their family. The couple discovered a strong sense of community there and a less expensive rent meant that Patrick no longer had to churn out ornaments to sell. He can now spend more quality time creating in the studio, challenging himself as an artist with his unique, time-intensive sculptures. Likewise, Veronica also focuses on the things that inspire her, like three huge canvases under the tall ceilings at the Artspace apartment. The multiple moves distracted them from their artistic practice, but things are shifting now. “This is the first time that I feel like we’re being appreciated for being artists,” Veronica said with a laugh. “Being at Artspace makes me love New Orleans even more.”

Exploring the feasibility of an Artspace live/work project Artspace began working with the Mesa community in 2012 to explore the feasibility of an Artspace live/work project, due to strong local momentum for the arts as a strategy for downtown development. Over a six month period, Artspace and local partners conducted five community meetings and launched a city-wide arts market survey (which received feedback from more than 660 artists). What emerged through the six month community-inspired process, and collaboration with the city were many of the ideas that informed plans for the Mesa Artspace Lofts. In operation since the Summer of 2018, the Mesa Artspace Lofts includes 50 units of live/work space for artists and their families. Unit rents serve households below 60% of area median income levels. Rachel Wacker is a community curator and multi-disciplinary, social-practice artist. For years she admired the vibrancy of the Lowertown Arts District in Saint Paul, MN; and after moving there in 2010, she became part of an amazing network of community-engaged artists. In 2016, however, the privately-owned artist lofts where Wacker lived was sold for redevelopment, prompting her move to one of Artspace’s oldest projects: The Northern Warehouse. It remains among the few artist-friendly buildings left in the area. “People sometimes take the artist community for granted,” Wacker said. “They love the energy we bring, but it’s important to support those who give so much. All of the things that make this arts district wonderful didn’t happen in a vacuum.” Wacker calls the individuals who work to keep the arts district vibrant “community caretakers,” and has taken on this role herself as part of the “next wave” of artist activists post-1980s. She has garnered the trust of local businesses throughout Saint Paul, including the Saint Paul Saints Baseball Club, for which she developed a program in which artists activate the ball park during the on-season. Wacker is also behind pop-ups like the Saint Paul Cozy Project that “yarn bombed” 170 lampposts downtown. “Visibility is one of the biggest challenges the art community faces in Lowertown,” she said. “If we are invisible, we won’t be invited to the table where we can advocate for the resources that we need to thrive … I’m always working to find legal ways to get art and artists into public spaces in our neighborhood, where we can be seen and heard.”

The Ambassador Theater in Baltimore In 2018, Artspace was invited to the City of Baltimore by the Mayor and other civic and community leaders to develop a proposal for the redevelopment of a long-vacant, Art Deco icon: The Ambassador Theater. Located on Liberty Heights Avenue in Northwest Baltimore, the redevelopment could fill the need for a cultural destination in an area with few existing artistic outlets for creators and patrons. So, in the summer of 2019, Artspace led a series of conversations to listen to ideas. Residents of Forest Park and Howard Park, the predominantly Black neighborhoods where the Ambassador is located, contributed concepts of what they wanted to see created for their community if the Ambassador Theater was redeveloped. Artists of varying disciplines from across the City provided input as well.

Inspired by the powerful visions presented, Artspace purchased the historic theater at public auction in April 2019 and, as owners, have set a plan into motion to create a new community arts and cultural center. In response to the community input, Artspace’s adaptive reuse of the Ambassador will provide affordable performance, practice, and rehearsal space for small organizations or individual artists, as well as creative technology, sound and video production “labs.”

Artspace has been very intentional in the selection process to hire a local architectural firm with a design team that reflects the community. Ultimately, after a thorough RFQ process that concluded in May 2020, Quinn Evans was selected. Not only does Quinn Evans bring years of experience repurposing historic structures, many of them into new arts offerings across Baltimore; they also present a team led predominantly by women and architects of color (in a field where women and minorities make up roughly only 17% and 4% of the profession, respectively). Design work will advance even amid the pandemic, with a proposal to be presented to the community and the artists in early 2021. The pandemic might have postponed the original 2020 target date for a grand opening of the Oglala Lakota Artspace (OLA) but nothing could disrupt the enthusiasm artists have for the space. Developed through the powerful partnership of First Peoples Fund, Lakota Funds, and Artspace, the building houses individual artist studios, shared workspace, a recording and sound studio, classroom space for art classes and business trainings, commercial space, exhibition space, a performing arts venue, and garage space for the Rolling Rez Arts bus.

There is a vibrant arts sector of economic activity on the reservation. Thirty percent of Oglala Lakota tribal citizens on the reservation identify as artists and forty percent of Pine Ridge households rely on some form of traditional arts for income. Yet, a 2013 First People’s Fund survey of more than 100 Pine Ridge-based artists and culture bearers, called Building a Creative Economy: Art as an Economic Engine in Native Communities, found that limited access to creative space was one of the six resources artists need to succeed.

“Many years of enormous effort have gone into this,” said Kelley Lindquist, President and CEO of Artspace and a member of First Peoples Fund’s board of directors. “It’s a great privilege to be collaborating here on Pine Ridge and collaborating with such extraordinary people.”

The OLA is located in a growing economic and cultural corridor near Pine Ridge Area Chamber of Commerce, Lakota Prairie Ranch Resort motel and Oglala Lakota College. Tammy Eagle Bull (Oglala Lakota), co-founder and president of Encompass Architects, the first certified Native woman architect in the United States, designed the space around the Lakota star knowledge map. “The stars are a guidebook for the Lakota people that tell of the journey from the Spirit/Star world to the Earth/Material World.” Eagle Bull explains. “In each group of stars on the Lakota star map there are stories and teachings that help guide, teach and inspire, which is also the hope for this building.”

In October of 2021, the City of Chicago’s Commission on Chicago Landmarks announced that the Pullman Artspace Lofts had received the Chicago Landmark Award for Preservation Excellence. Chicago Landmark awards honor outstanding projects that advocate for Chicago’s historic and architectural heritage. Developed by Artspace in partnership with Chicago Neighborhood Initiatives and the local arts organization Pullman Arts. Pullman Artspace Lofts houses 38 apartment units that serve veterans, low-income artists and individuals with supported services and were designed specifically for artists and their families. It is the first new housing development in the neighborhood in more than 60 years and signals a revitalization of the community.

Pullman Artspace Lofts uniquely combines historic preservation, needed low-income housing and dedicated arts space in a 33,000-square-foot development on Chicago’s far South Side. Artspace led the rehabilitation of 1880 brick tenement housing in the historic Pullman neighborhood, one of the nation’s first planned industrial communities in the 19th century. The new development is the result of an intense community engagement initiative by Artspace and the development partners, which included surveying more than 380 artists and community members who indicated there was both a great need and broad community support for the development of a work/live space for artists and their families.

Pullman Artspace Lofts is housed in two historic buildings and one new construction building. The exteriors of the historic buildings were meticulously restored to their original appearances, and the interiors were conscientiously adapted with much of the woodwork retained. The new construction building was designed by taking inspiration from the Pullman neighborhood’s historic appearance and craftsmanship. Today, 100 percent of the apartments are leased and fully occupied with a long waiting list of residents hoping to live and work in the space in the future — proving how sought after this new hybrid arts and housing project in historic buildings truly is. 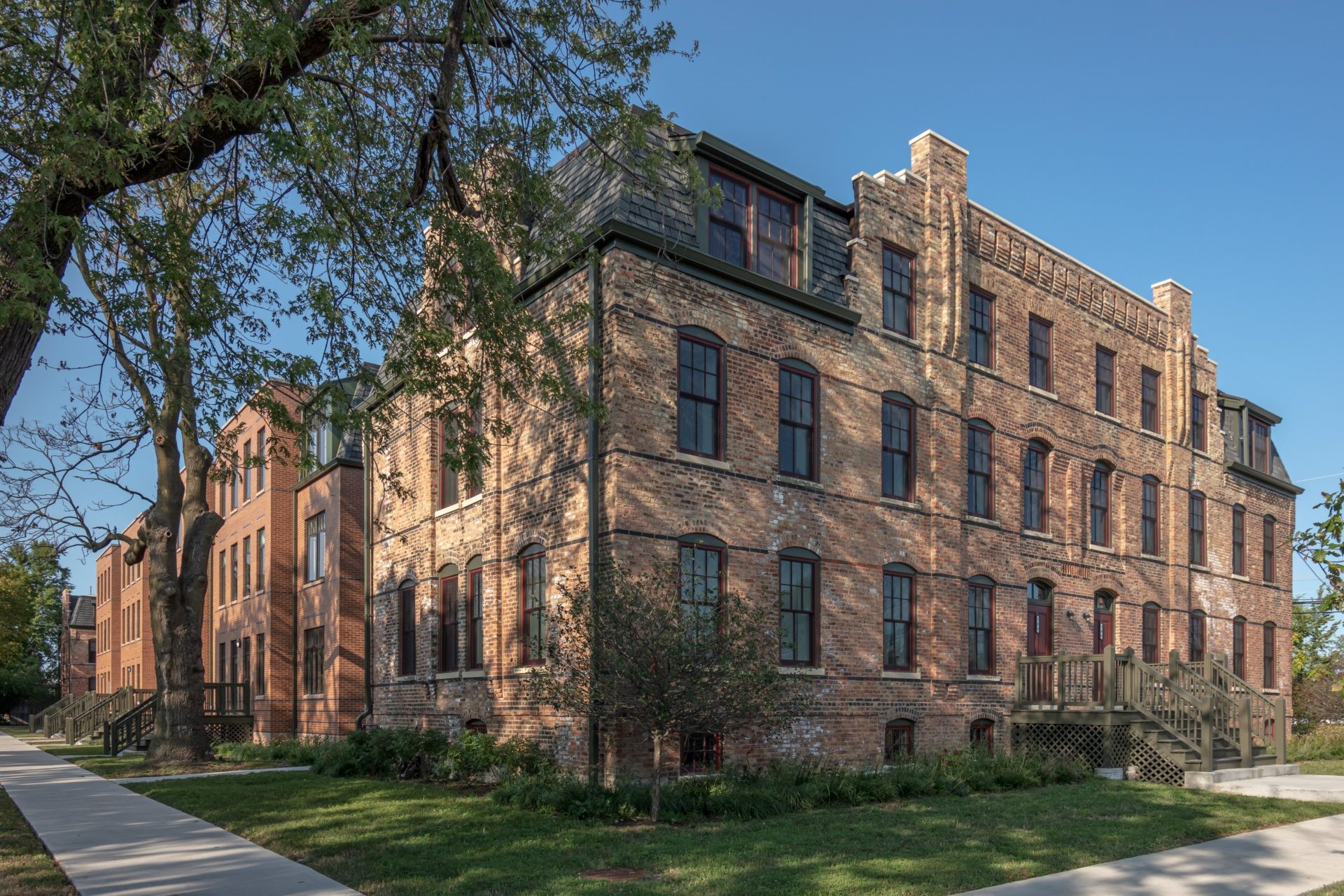