Central City Concern (CCC) is a 501(c)(3) nonprofit agency serving single adults and families in the Portland metro area who are impacted by homelessness, poverty, and addiction. Founded in 1979, the agency has developed a comprehensive continuum of affordable housing options integrated with direct social services including healthcare, recovery, and employment. Central City Concern's innovative strategies for supporting personal and community transformation include direct access to housing, integrated healthcare services for people who are often alienated from mainstream systems, the development of peer relationships to nurture and support recovery, and attainment of income through employment or accessing benefits.

CCC maintains over 2,200 units in 29 properties for low income individuals and families. In addition to housing nearly 4,000 individuals, CCC also provides many programs to help community members struggling with illness, addiction and homelessness. CCC operates 12 health center sites, which served almost 9,300 patients in 2021. As people recover, CCC also provides several programs that help individuals to find jobs. Over 1,300 people worked with CCC’s Employment Specialists in 2021. As CCC moves into their fifth decade, they continue to invest their resources, reserves, and hearts into their mission. 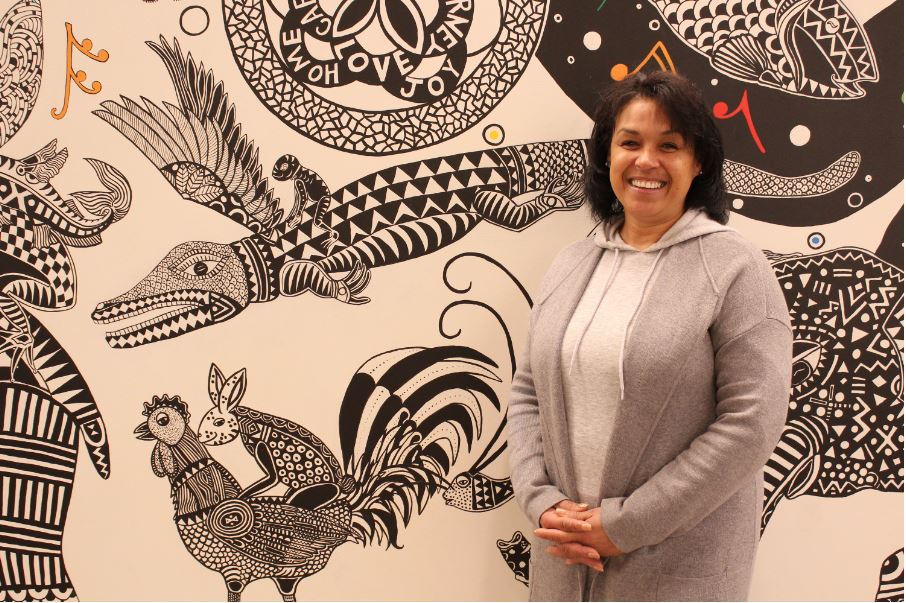 Turning her life around

Charlette was homeless and addicted to heroin for six years — living in cars, sleeping in bus stops, or just walking around all night. Then, six friends died of overdoses in one week. That was when she knew she had to turn her life around. She was one of the first people to walk into CCC’s new Blackburn Center. Within a single day, Charlette:

Over the next few weeks, Charlette saw a drug counselor and became active in groups and one-on-one counseling. She also became one the first residents of Blackburn’s alcohol- and drug-free transitional housing. “Having my housing and health care together under in one building is a big thing!” Charlette says. “I can just go right downstairs and get my Suboxone at the pharmacy, or go to a group meeting, without ever leaving the building. That’s huge.”

Within less than six months, Charlette graduated from her outpatient program and, guided by Blackburn’s on-site employment specialist, began training as an on-call employee in CCC buildings. Clearly, the full slate of services available at Blackburn Center is working well for Charlette. She says, “I’m paying back everything that CCC has given me by being a success. That’s exactly what I want to be.”

Saved by a Cat Named D.O.G. 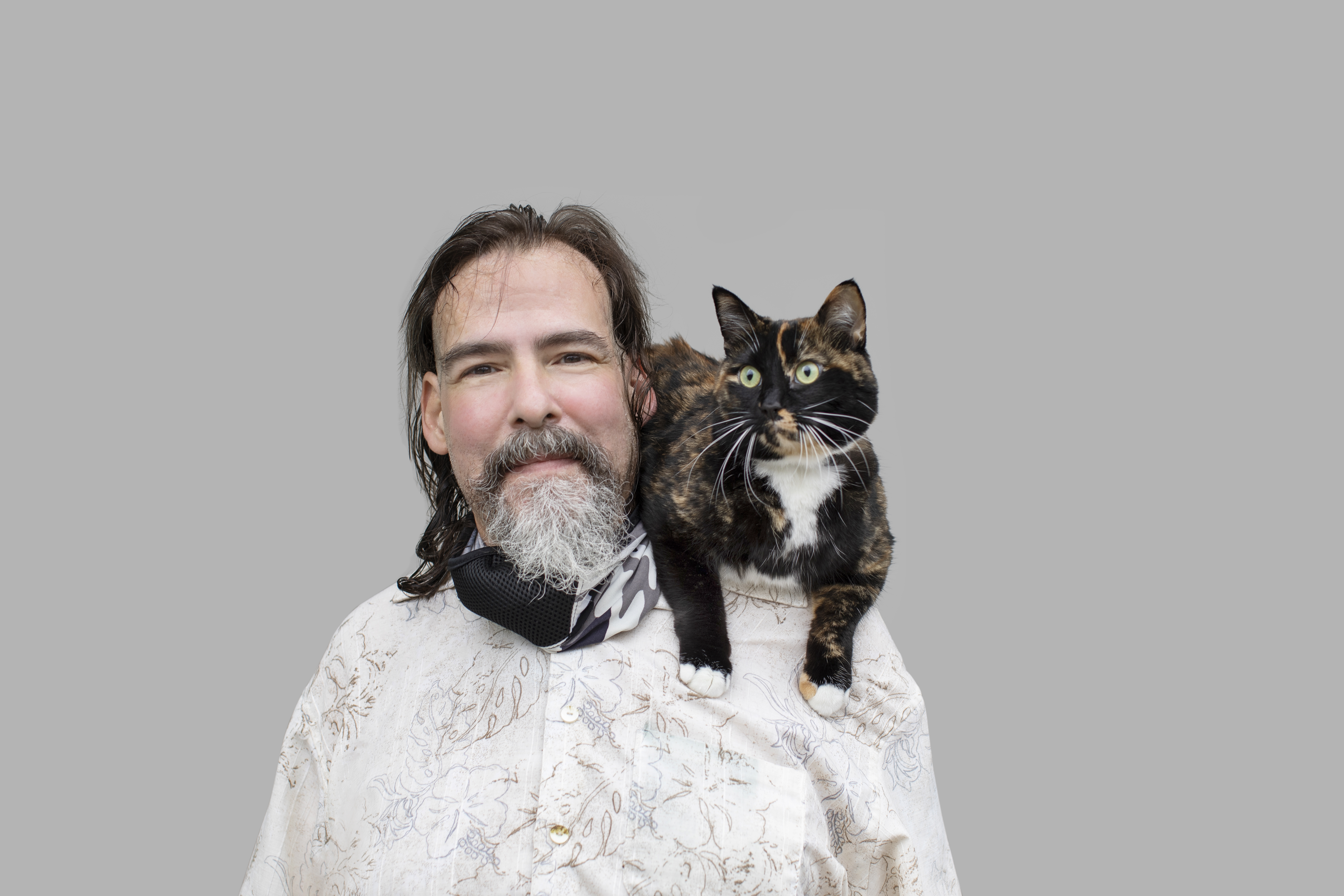 Rev went from a successful career in tech to experiencing homelessness to being successfully employed by CCC. Along the way, he lost the love of his life and abused methamphetamines as a means of self-medicating his ADHD. He sought treatment at CCC’s Old Town Clinic from our world class providers. During that time, he adopted emotional support cat DeeOhGee. “I always wanted to have a cat named ‘dog’ without actually naming her that.” Eventually, Rev found his way to the Blackburn Center where he received treatment for his substance use disorder. Almost everywhere Rev goes, she rides on his shoulder. Even when he didn’t have an appointment or a class, he would visit Blackburn with DeeOhGee.

Rev’s counselor Phillip can’t say enough about him. “The thing about Rev is he just kept showing up, no matter what — using or not using, good days and bad. Even if his campsite got moved the day before,” says Phillip. “And he always told the truth, no matter what — whether he was in rage, grief, feeling hopeless, or any other struggle. Honesty is where recovery begins, so that made working with Rev a pleasure.”

After he graduated from the substance use disorder program in 2021, Rev secured permanent housing at Blackburn. Even if you don’t know him by name, he’s known as the guy with the cat on his shoulder. And Rev also worked with CCC’s Employment Access Center to secure work as a janitor at River Haven. 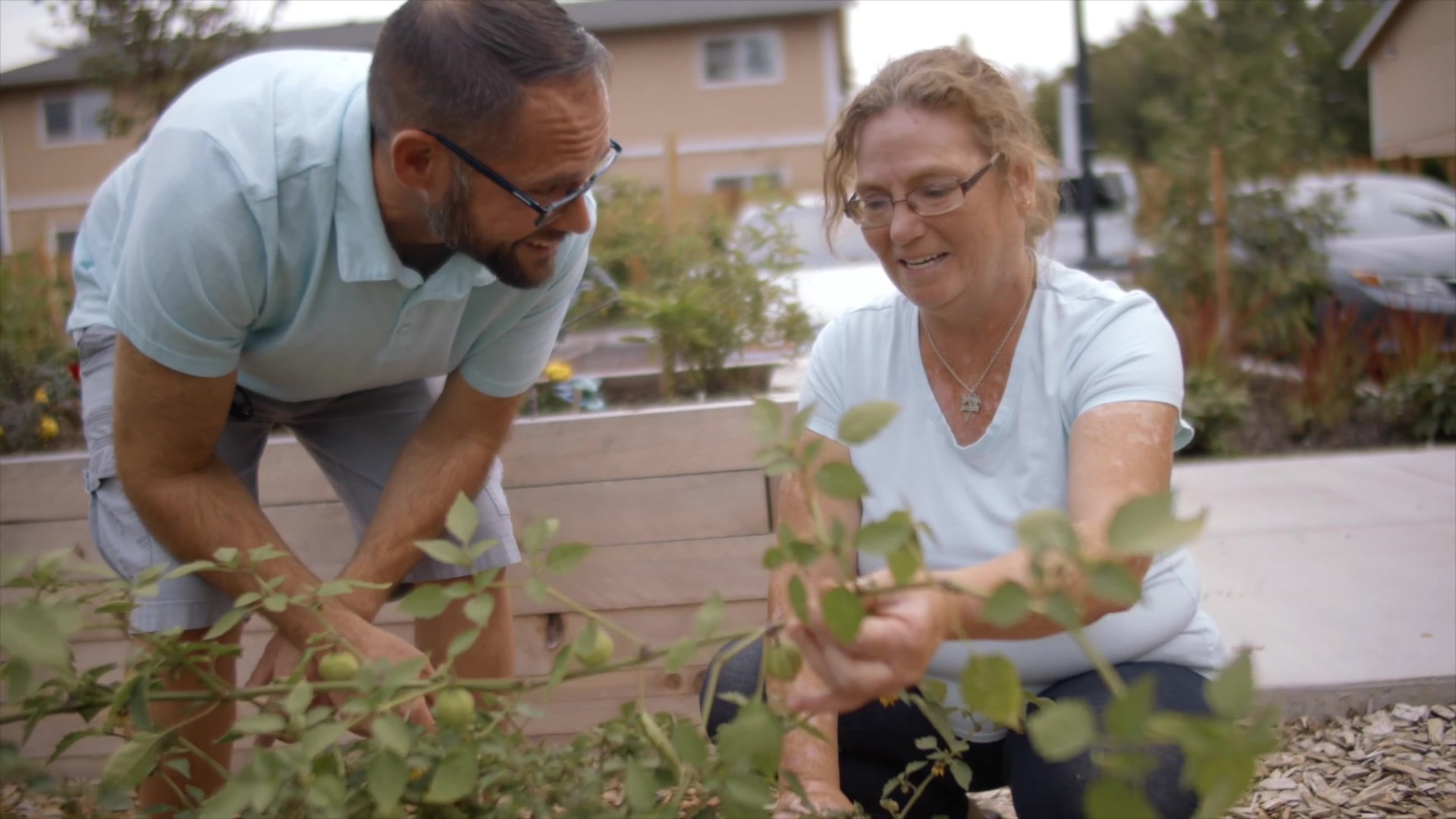 Living in a tent on the streets can be traumatic. It’s a situation Cynthia knows all too well.

After her housing situation with her daughter didn’t work out, Cynthia found herself living on the streets. Paired with physical challenges, life proved difficult. And then Cynthia met Casey Culley, one of CCC’s Community Health Outreach Workers. CCC’s community health outreach workers are charged with meeting people where they’re at. They carry heavy backpacks stocked with food, water and other necessities which they pass out to folks experiencing homelessness.

Casey visited Cynthia’s tent every day, checking to see if she was OK. As their relationship strengthened, Casey helped Cynthia get her birth certificate and driver’s license. He also alerted Cynthia when Cedar Commons opened. “...as soon as he found out that Cedar Commons was open, he brought down his laptop and we stood there, and we put out all the information and so I could be on the list to get into to Cedar Commons. It took me less than a week to get into Cedar Commons. To get my home.”

Cynthia has also benefited from receiving primary care at the Blackburn Center as well as mental health counseling. She looks forward to each day now. “Oh, my story is very important. Because I know there are other people out there that are maybe not in the exact same situation I am in, but maybe it’s similar. Maybe they want to get the help... It’s a complex [[Cedar Commons]] that’s so amazing. They have counselors there so if you need help, they’re there. They have peers that will help you out as well to get what you need to get done.” Cynthia has found her community at Cedar Commons, her home.

"It is like a community. It really is. I’ve taken vegetables from my garden. And I’ve made ratatouille tarts because we had eggplant, zucchini and tomatoes. So, 90% of that tart was from our garden. And it was amazing. So, not only did the staff love it, but the residents loved it as well... And is wonderful to see when they take and eat things that are from the garden. Or even things I make.” – Cynthia 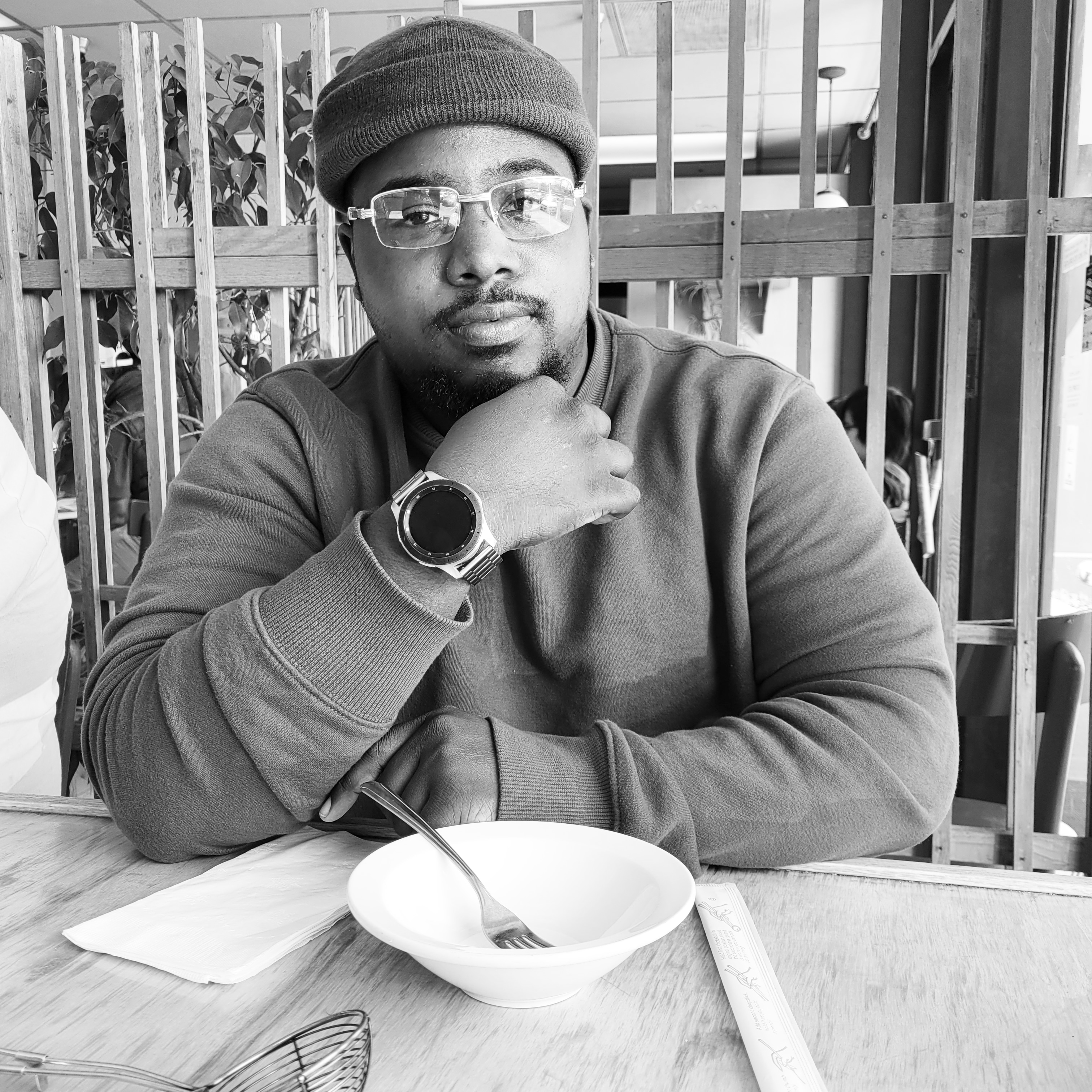 Courday was tired of the cycle of addiction, homelessness and incarceration he found himself in: “I would get arrested, go to jail, detox in jail, get out, and do it all over again.” Then came the moment when Courday decided to make moves toward stability.

Courday was arrested on an outstanding warrant while riding a MAX train to Gresham without a ticket. He was on his way to get a fix. Once again, he was forced to detox in jail. “When you’re in jail, and you’re detoxing, they don’t have empathy or compassion for addicts. They just look at you and think you’re another junkie.”

This time, he broke the cycle.

After completing inpatient treatment, Courday entered CCC’s Richard L. Harris Building, or the “8×8.” He was given a place to live off the streets and access to services to support him in his recovery. “The structure of being in a CCC program allowed me to be myself and take things at my own pace,” he says.

Accountability played a huge role in the structure that supported Courday’s sobriety. “When you get to know all these people and create these relationships, sobriety is the glue that keeps everybody together,” he says. “I think what kept me honest and kept me sober was not wanting to lose that sense of community.”

Courday was set up with Employment Specialist Angelo Polvorosa, also CCC alumni, who now works at CCC’s Employment Access Center (EAC). At the EAC, clients like Courday are referred to work with employment specialists for job coaching, skills training, resume and cover letter building and vocational and computer training. Clients can also access the EAC to use a computer, copier or fax machine, and even get professional attire from a clothing closet.

Courday initially landed an on-call position with Central City Staffing, working at the front desk and holding janitorial duties at many of CCC’s properties.

Angelo encouraged him to take advantage of a volunteer opportunity at 4D Recovery’s Civic Engagement Leadership Development program. Courday found his niche in this role, advocating for laws, policies and resources to support recovery in the community and at the state level. It wasn’t long before Courday became the director of the program he started out volunteering for.

Courday is currently director of special projects and executive assistant at 4D. “I love helping people become better versions of themselves, just how I was taught to be a better version of myself,” he says. His passion for giving back was fostered at CCC: “Living at the 8×8 and seeing how their case managers operate is what made me want to get into the area of helping people.”

“A lot of times people come in with the notion that they have a past, so that limits their future. When the light bulb comes on, they realize it’s not rebuilding to get back to where they were. This is a real second chance. That is the best part of the job for me.”

After getting sober, Courday picked up photography as a hobby. He taught himself how to use a camera and spends a lot of time on various photography projects, his favorite being portraiture. “You can really tell a story when it comes to portraiture photography.” Courday’s creative endeavors and activism are only just beginning. So, what’s next? “I want a house and a wife and some children. You know, that’s pretty much the dream; and you know, to get a dog.”

“I’ve done a lot of things that I would never have thought I’d be able to do. Recovery has given me a lot. CCC helped me get there. 4D helped me get there. If it wasn’t for any of those two organizations. I don’t know where I’d be right now or what I’d be doing.” -Courday Since 2015, CCC’s Puentes program has welcomed Spanish-speakers into a culturally responsive community where things like language, country of origin and documentation status are not barriers to a life in recovery. Many people who complete treatment stay close to Puentes through El Senado, an advisory group of former clients who provide peer support and encouragement to newer clients.

Jose is an El Senado member who found a community in Puentes after decades of struggling with addiction and homelessness. Jose immigrated to the US from Nicaragua seeking political asylum. Despite having legal documentation, his life was turned upside down by the immigration and criminal justice systems. Jose finally took back control of his life by starting treatment at Hooper and Puentes, living in the Richard Harris building, and finding employment through the Employment Access Center. Today, Jose gives back as a member of El Senado and is in school to become a Certified Drug and Alcohol Counselor. “To see someone I could relate to, who spoke the same language, gave me hope. Giving back and making a positive impact in the Latino community gives me purpose.” Through partnerships with the City of Portland, Portland Business Alliance and others, our CCC Clean Start program helps keep neighborhoods clean by clearing away trash and removing graffiti. It’s also a mentored six-month work experience that gives formerly homeless people the opportunity to work, grow and gain crucial experience and confidence to pursue employment opportunities.

After completing inpatient treatment at the Native American Rehabilitation Association, David didn’t feel ready to live on his own yet. He opted to join CCC’s “8x8” recovery program in the Richard Harris building and work for Downtown Clean & Safe in order to stay on track in his recovery and give back to the community. He now lives in permanent housing at the Richard Harris and is working toward moving up the ranks in Clean Start. “Visiting homeless camps to take trash kind of reminds me of where I’d be if I didn’t get clean. I was an addict and I hope I inspire others to think, ‘I can do this.’”