Formed in 1965, Self-Help Enterprises (SHE) is a nationally recognized community development organization whose mission is to work together with low-income families to build and sustain healthy homes and communities in the San Joaquin Valley of California. SHE’s efforts today encompass a range of efforts to build better homes and communities for farmworkers and hard-working families. As of 2021, SHE has assisted over 6,400 homeowners build their homes. SHE has also repaired over 6,700 homes and provided over 15,300 individuals and families with homeownership education and counseling. Under the sustaining neighborhoods initiatives, SHE has assisted over 2,200 homeowners with buying a home on the open market, constructed nearly 2,000 multi-family affordable rental housing units, and provided over 33,000 families with safe drinking water and sanitary sewer infrastructure. In total, SHE has impacted the lives of over 65,000 individuals. 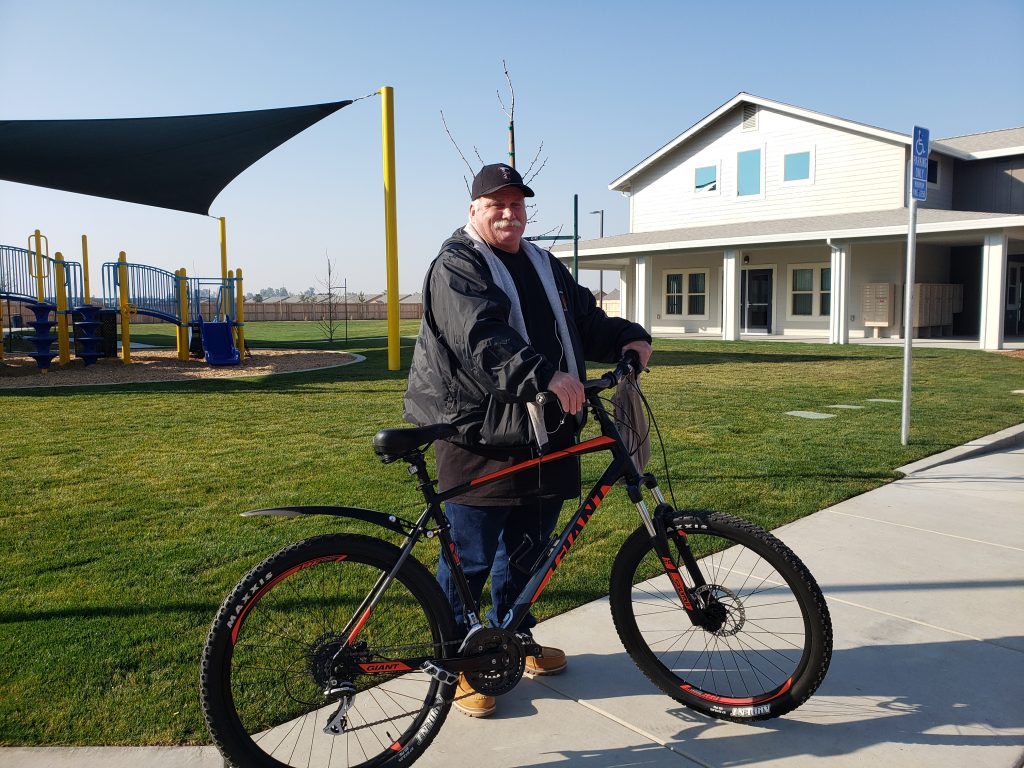 Kevin Finally Has a Safe Place to Call Home

Kevin Duvall moved into his new Sequoia Commons apartment in Goshen, CA in February of 2020. Later in life, Kevin found himself caring for his dying mother who eventually passed, leaving him alone and without a home. “My mother lived in that home for 34 years, but because we had a reverse mortgage, once she passed, the bank took the home. I walked away with a backpack, two photo albums and my mom’s ashes.” Kevin remained homeless for ten years. He did his best finding odd jobs, but none of them were enough to secure an apartment. Once he finally had enough for an apartment, he was hit with “you don’t have enough renter’s credit.” It was never enough. He worked in the fields to make ends meet but did not have a place to come home to. In an unfortunate turn of events, one day while riding his bike to the grocery store, two intoxicated men hit him over the head with a hammer and took his bike. He was left on the side of the road having a seizure from the trauma until the police and ambulance showed up. Kevin was taken to the hospital where he stayed for three weeks. It was there that doctors informed him that he had a tumor on the back of his head. “If I hadn’t been hit over the head, I wouldn’t have found out about my tumor,” said Kevin. He’s been disabled since and has been in and out of medical facilities taking care of his health issues.

Kevin reached out to the Kings and Tulare Homeless Alliance, a coalition that coordinates and leverages policy and resources that empower community partners to address homelessness in Kings and Tulare Counties. Once connected, Kevin learned about the Housing and Disability Advocacy Program (HDAP), the Mainstream Voucher Program and CSET’s Continuum of Care program, which helps develop and provide housing and related supportive services for people moving from homelessness to independent and supportive living. With the help of the Homeless Alliance and partners like CSET, Kevin had the opportunity to apply to Sequoia Commons, Self-Help Enterprises’ new affordable rental community located in Goshen. “Kevin is a very nice guy. He tried to connect with as many resources as possible," said Leticia Hinojosa, the Coordinated Entry Manager at the Kings and Tulare Homeless Alliance. “Even during some really stressful and frustrating times, he never gave up. His end goal was housing and happy that he finally got housed.” Leticia mentioned that “it’s a really big challenge” to get people experiencing homelessness off the streets. Even when they have vouchers, there are so many layers of requirements that often limit options.

Monthly net rents at Sequoia Commons range from $331 to $766 and are determined based on unit size and resident incomes. These below-market monthly rents mean that Self-Help Enterprises is providing an affordable housing opportunity to local residents like Kevin.

“You don’t know what you have until it’s gone and when you do get it back in this magnitude of greatness, where everything is so beautiful and clean,” smiled Kevin. “It’s a life-changer. I have my own place now. I have a place to cook my food, take a shower to get ready for my doctors’ appointments.” Kevin says it’s the little things that really matter like “being able to turn a doorknob or shut the door for some privacy when showering.”

A New Home Over Her Head 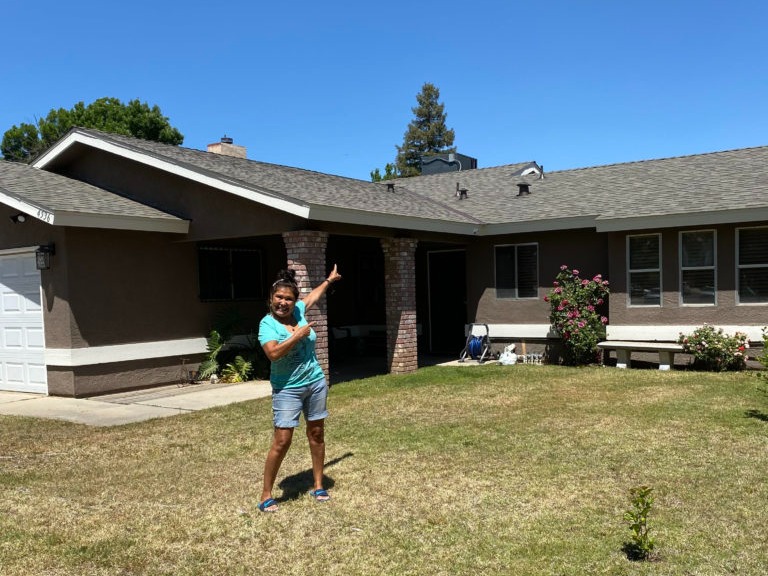 China has lived in her Fresno, CA home for over 20 years; long enough to build a beautiful home where her children and grandchildren are able to spend quality time together. A neighborhood she describes as “nice and quaint” is where she hopes to continue living for many more years. “It’s a good neighborhood, we all know one another,” says China. “And I love working in my backyard and in my garden.”

With the passage of time, however, her home has gone through some wear and tear, particularly on her roof. She had plans to get it fixed but when COVID-19 hit, she was one of the many individuals who lost their jobs. “It was very hard to hear that I was being let go,” said China. “I had been working in the medical administration field for over 30 years and suddenly it was all gone. But in a way, it was a blessing in disguise.”

China learned of Self-Help Enterprises’ Rehabilitation Program through her mortgage lender friend. She decided to reach out in early 2020 and started the process to replace her roof. The process started in June of 2020, and her new roof was completed in February of 2021. “I am so grateful for SHE’s help. I recently looked into an unofficial appraisal, and I saw that my home value already went up. I couldn’t ask for more,” smiled China.

A New Home In Patterson, CA 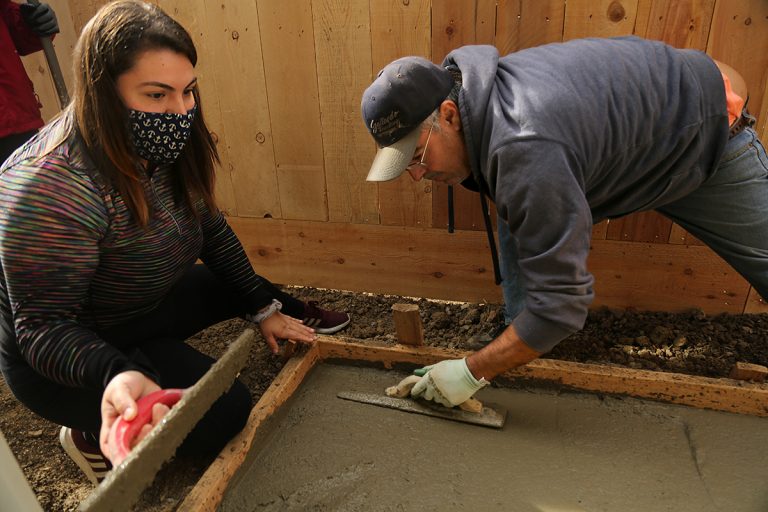 Candie Gallardo, a passionate 27-year-old single mother, strolled around her nearly completed self-help home with pure admiration. “This is where I plan to put the TV and this is where the couch will go,” Candie points out with assurance. Before embarking on her homeownership journey, Candie had no construction experience but has learned a tremendous amount through this process. “Some things were not as difficult as I thought, like the wiring. If I ever wanted to swap the current light for a chandelier or change the style of light switches, I know I can easily do that in the future.”

Candie is part of the first group cohort in Patterson to participate in Self-Help Enterprises’ (SHE) Mutual Self-Help Housing program. In total, SHE is planning 118 single-family detached homes, with 3- and 4-bedroom options. Patterson is a rural town on the west side of the San Joaquin Valley with a population of about 22,000. In recent years, Patterson has grown as a bedroom community for east Bay Area commuters, leaving many local families behind. “I know many people who can’t afford to even rent in this area. I have a friend who had to move to Modesto and commutes here,” says Candie. The median sales price for a home in Patterson is approximately $382,000, with minimum monthly mortgage payments over $1,800, which means a family needs to earn nearly $73,000 annually to afford a home. Renters need to earn nearly twice the state minimum wage in order to afford the average asking rents in Patterson. Candie first reached out to SHE in 2017 after her father encouraged her to apply for the Mutual Self-Help Housing program. She was put on a waitlist for Patterson for two years before the project began. “I worked with Juanita in the Gateway counseling program, who said I was the ideal candidate. I had little debt and had my finances in order. I was able to take all the homeownership classes online, which made it very convenient. 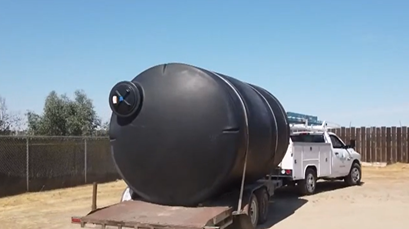 The San Joaquin Valley, known for its bountiful lands that produce a large portion of the country’s food supply, is experiencing the drastic effects of a worsening drought and record-breaking temperatures that have left many rural families with dry wells. While many of us take for granted the ability to turn on our tap water without an ounce of worry, the sad reality for families with dry wells is that they are unable to cook, unable to feed their family, unable to bathe and carry on with basic hygiene necessities. Since March 2021, SHE’s Emergency Services drought response team has worked around the clock to address the influx of calls and emails from community members faced with drought devastation.

“It’s absolutely amazing and honestly we never thought there was an organization that would help us when our well went dry,” said Laurel Boylan, a water tank participant in Clovis, CA. “We found this amazing organization through social media, and we were divinely led to water access again.”

“The past five years California has been rocked with devastation due to natural disasters, as well as the COVID-19 pandemic,” said Tami McVay, SHE’s Assistant Program Director of Partner Services. “Our state funds for disaster response are limited. It is vital to our economy and utterly important that private well owners have their wells inspected to ensure sustainability. For every dollar spent on preparedness, four dollars is saved in response. SHE is taking a proactive approach towards drought resiliency and climate change. Let us help you be prepared.”

Reflecting SHE’s mission to build and sustain healthy homes and communities, the Emergency Services team strives to support community sustainability by educating our most vulnerable populations about how to properly prepare for natural disasters such as drought, fire, flood, and earthquake. The program also helps families receive urgent access to clean water and help with water well replacement and water filtration services as needed. “During the previous severe drought cycle we earned our reputation as first responders, and we are embracing the same role with the help of key partners such as the State Water Resources Control Board,” said Tom Collishaw, CEO of Self-Help Enterprises. “While we feel better prepared this time round, I fear this may become our new normal.”