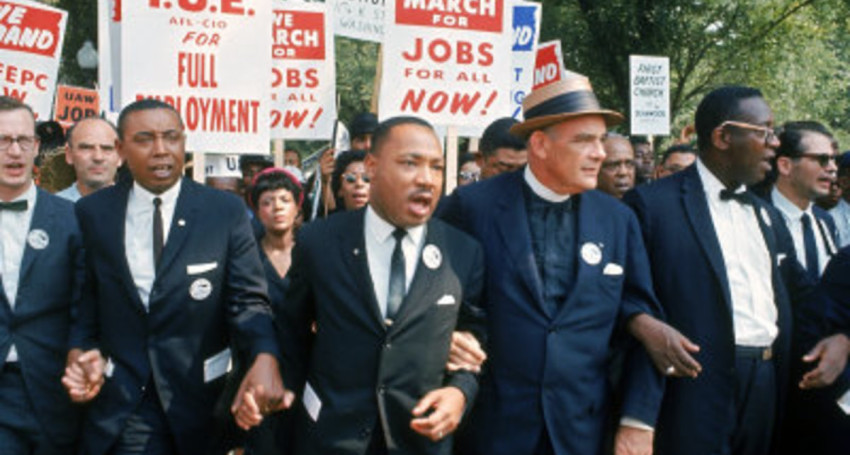 Dr. Martin Luther King Jr. with the original leaders of the March on Washington in 1963

50 Years Later: How Social Impact Investing is Advancing the Dream

50 years ago when my father participated in the original March on Washington for civil and economic rights, he could not have envisioned the social and political changes which have occurred in the United States during my lifetime. This past weekend, I was humbled and honored to stand with my family and hundreds of thousands gathered by the Lincoln Memorial to commemorate King’s 1963 march and his iconic “I Have a Dream” speech.

We live in a nation celebrated around the world for its racial and ethnic diversity. And yet more and more our differences pull us apart instead of creating opportunities for us to come together. Earlier this summer, the New York Times’ front page of the business section led with a story about income inequality in the United States and the persistence of poverty. Our differences in wealth and income are greater than at any prior time in our history, not just within the United States but around the world. And as we know, poverty leads to so many immeasurable social ills like disease, violence against women, poor health outcomes, and infant mortality.

Three years into my role as CEO and eight years after joining Calvert Foundation, I am more convinced than ever that social investing is a critical tool for bridging the income and wealth gap, not just in America but globally. The United States exemplifies diversity at its best and its worst. Our history of racial and economic conflict is mirrored in countries like Brazil, where tensions over public transportation costs led to protests by millions earlier this summer. And here in the United States, legally sanctioned racial segregation is not a distant memory for my 83 year old mother—but a painful part of her past reality—the impact of which continues to rear its ugly head through institutional racism and unconscious racial bias.

While our differences have the ability to divide us, they also have the potential to connect us in powerful ways. Social investing, where investors seek both financial and social returns, is a means to this end. As I wrote in a prior post, we cannot rely solely on charitable organizations and governments to solve the overwhelming social problems of the modern world. Private capital from individuals and institutions must play a role in addressing our social issues if we are to achieve economic opportunity for everyone, regardless of race or gender or our other differences. In 2012 Calvert Foundation launched the Women Investing in Women Initiative (WIN-WIN) to empower investors to connect with causes and communities they care about, specifically women’s economic empowerment. This year we received generous support from Kellogg Foundation to explore a Diaspora Initiative which will link US investors with their countries of origin. These initiatives help make it possible for all investors to be impact investors.

Social investing empowers investors to connect with underserved communities, helping individuals lift themselves out of poverty. Unlike charity where donors can write checks without regard to outcomes, impact investing involves upfront due diligence and ongoing monitoring of investments. The resulting information exchange is beneficial for both investors and the recipients of the investment. Further, the act of repaying an investment creates a level of mutual respect and dignity that does not always come from a charitable donation.

At Calvert Foundation we believe in providing a hand up and not a hand out. Our view is shared by the more than 13,000 investors who have purchased the Community Investment Note since 1995. We have not only delivered on social returns—providing housing, jobs, and access to financial services—we are also proud of our nearly 20 year track record and 100% repayment to all investors. Our perspective on impact investing is shared around the world by leaders like Iain Duncan Smith, the conservative Secretary of State for Work and Pensions in the UK, and Prime Minister David Cameron’s Administration, who spoke at the G8 Forum on Social Impact Investing this past June about the power of impact investing to bridge the widening gaps in wealth and cultures.

In 2013 a new generation of social change agents is embracing our shared humanity to solve the challenges of our time. They are advancing the dream and making real King’s vision by purchasing fair trade products, committing to environmentally sound practices and demanding that their investments generate both financial and social returns. They are celebrating our differences in ways that unite our communities and our nations.

Four days before his assassination in 1968, King delivered a sermon on poverty entitled “Remaining Awake through a Great Revolution” at the National Cathedral in Washington, DC, saying “There is nothing new about poverty. What is new is that we now have the techniques and the resources to get rid of poverty. The real question is whether we have the will.” As Calvert Foundation strives to empower investors in order to empower communities, I firmly believe that impact investing will endure as a transformative mechanism to advance the dream. In another 50 years from now we will have succeeded in using the resources at our disposal to eliminate poverty and its detrimental effects, exercising our will as King called on us to do.