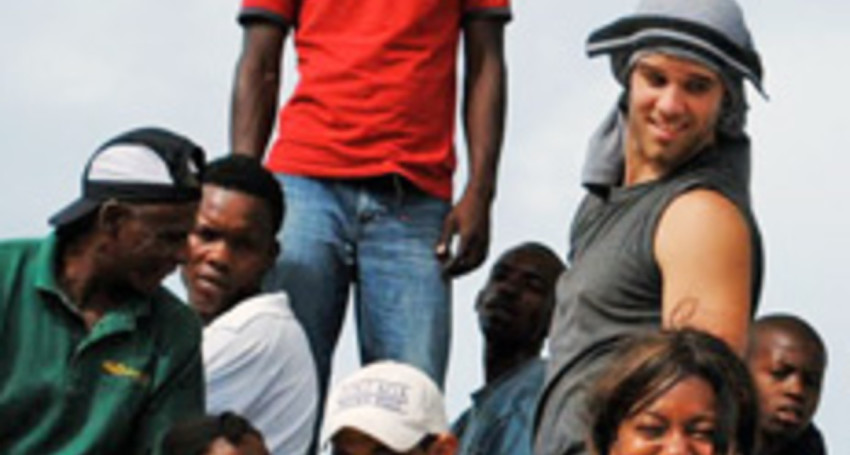 A View of Post-quake Haiti

A few months ago, Calvert Foundation Sr. Associate Patrick Davis took a trip to Haiti to volunteer for a friend's nonprofit, United Schools of Haiti. Aside from visiting Calvert Foundation borrower Fonkoze in Port-au-Prince, Patrick spent most of his time in Haiti helping to build a school in the countryside town of Fond des Blancs. Take a view into a post-quake Haiti through his eyes in his post on our blog. Patrick also made a video slideshow of the photos he took on his trip that we've posted to our YouTube site.

Last year – before the massive earthquake in Port-au-Prince put Haiti in the forefront of everyone’s minds – I began doing some volunteer work with a friend’s nonprofit organization, United Schools of Haiti. His group was planning a trip to Haiti in the summer of 2010 to do some construction work on a school and to network with local officials to explore new opportunities. When he asked me if I'd like to join them on the trip, I was thrilled. I truly enjoy the opportunity to have an impact in the work that I do at Calvert Foundation, but as an intermediary, it's rare that I get the chance to see the fruits of my labor in a very direct way. As a result, this trip to Haiti was very appealing to me. Service has always been an important component in my life, and this would be an ideal way to get my hands dirty and experience a new culture.

Then came January 12th, 2010. The earthquake. This erased any uncertainty about my decision to go to Haiti. I had to go. After seeing the news reports and reading the stories, I felt compelled to see firsthand the state of things in a country that had dealt with a chronic history of suffering – be it a result of natural or political disaster. I hoped to accomplish a few things on my trip. First, I hoped to be a passionate and energetic representative of my country. Many times in my travels in the developing world, I've noticed that being from the United States isn't exactly an asset. This has always been a chip on my shoulder in a way, and compelled me to work harder, be more compassionate, and dig deeper when I've been witness to the need in the developing world. Second, I hoped to be able to get some work done. Through United Schools of Haiti, we were supporting the construction of an elementary school in Fond des Blancs, and I wanted to develop some connections more broadly that could benefit the Haitian school community. Third, I hoped to reinvigorate my own sense of commitment to serving humanity. Though I've listed it last, this was probably the most important reason for my trip. I believe it's important for all of us who live a life of relative privilege to seize opportunities that force us to confront that state of privilege. It's not always easy to remember that the majority of the world lives without clean water, electricity, and food security. I hoped to be able to come home from my journey and share meaningful stories, pictures, and experiences with friends and family. Reflecting on these experiences would undoubtedly lead to discussions about what we can do. And there is so much we can do.

In August, I went to Haiti. During my time there, I found myself constantly vacillating between poignant moments of hope and despair. Arriving in Port-au-Prince, I was struck by the lack of progress with the cleanup. Entire city blocks were still nothing more than rubble. I saw countless families living in tents on top of – or outside of – what was left of their homes. The majority of the population that had not left Port-au-Prince was crammed into tiny shacks with blue USAID tarps to keep the rain out. We visited our guide's house in the countryside just outside of Port-au-Prince, which was reduced to rubble as a result of the after shocks. He had lost his home and his sister in the quake. The lead architect for our school project lost his wife. Children in our school community lost their parents. Nearly every adult and child that I interviewed had lost a family member. Of the estimated three million people living in Port-au-Prince at the time of the quake, 300,000 died. This was made evident in the storefronts of funeral homes – sadly some of the only thriving businesses in the capital city. The scale of the disaster was almost incomprehensible, but at the same time, completely visible. During my entire stay in Port-au-Prince, I saw just one government bulldozer removing rubble. In contrast, I saw many people with sticks and shovels, digging through the rubble to find anything of value that they might be able to sell for a little income. It's still unclear to me how the population that remains in Port-au-Prince is able to survive, but this speaks to the incredible resilience of the people and the human spirit.

During my stay I began to understand a little bit more about how necessity breeds innovation and entrepreneurism. Everyone, everywhere seemed to be selling something. When our group badly blew out a tire in the Champs-de-Mars district, we were greeted at the side of the road by a few men who repaired the tire in a matter of minutes. They used a simple heating mechanism that I hadn't seen before to rework the rubber in the tire. I laughed to myself thinking about a recent experience back home when I had a miniscule gash in a tire, and of course, it was "too large to repair" so I was forced to buy a completely new one. No chance our friends in Haiti would have discarded my tire. At the same tire fix-it stand, I noticed a few men getting haircuts. In the time it took for a tire repair the men at the stand realized they could offer haircuts as well – truly an entrepreneurial vibe.

In the countryside near our school project, I noticed the same resourcefulness and creative thinking. Of course there was no public water system, and for that matter, no infrastructure whatsoever – only dirt roads and houses built by hand-mixed concrete. Nearly all of the houses I visited in the community had their own rainwater harvesting systems. Gutter systems led from the roof to a large, dug out cistern, which collected water each time it rained. This water was used for cooking, drinking, and washing, among other things. Due to the absence of industry and the pollution that comes with it, the pure rainwater was a valuable asset that the community had learned to harness over time. Many households had saved up to buy one solar panel, which they used to light their houses at night. In fact, besides the few motorbikes and the intermittent production of charcoal, I would guess that the countryside community was almost completely carbon neutral.

Whereas the chaos and enormity of Port-au-Prince made thinking about opportunities for development quite overwhelming, it was easy to see how some simple training and technical assistance could go a long way in the countryside. I hope that Haiti continues to deurbanize as a result of the earthquake. I believe there is a great possibility for strong, sustainable, self-reliant communities to emerge and prosper outside of the over-burdened capital. This phenomenon is happening as we speak – and it may very well be the most direct path to better outcomes in the future for Haiti's people.

Since I've returned home from my trip, I'm wrestling with ideas about how I can be of service to Fond des Blancs and the countryside community that welcomed me with such open arms. In the short term, I'm helping to sponsor a scholarship for a student who will be attending school in the fall. I'm also continuing to work with a talented Haitian entrepreneur who has dreams of creating a public health radio station for the community, opening up an English-training center, and organizing classes to teach Haitians about rainwater drip irrigation and micro-farming.

If you're interested in hearing more about my experience in Haiti, please check back on our blog in the coming weeks, where I'll share more stories and anecdotes about the challenges and opportunities I observed on my trip.