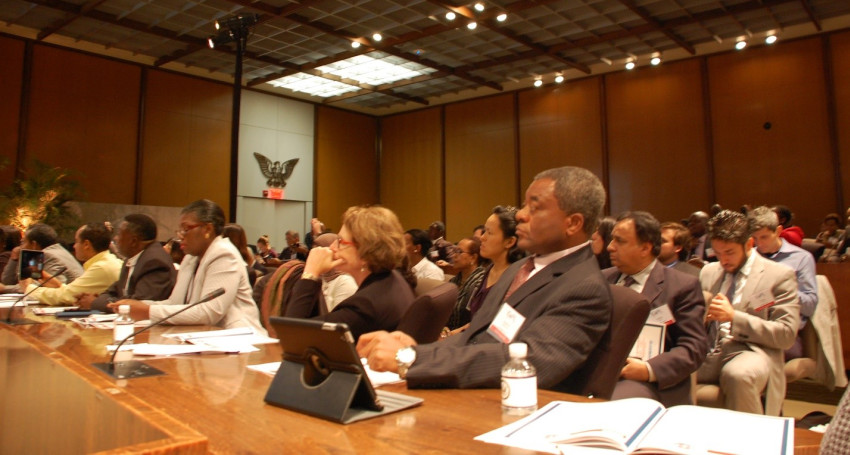 Celebrating the Global Diaspora with over 90 Events Worldwide

Last Friday the International diaspora Engagement Alliance (IdEA), a public-private partnership Calvert Foundation manages with the U.S. Department of State and the U.S. Agency for International Development, kicked-off Global Diaspora Week (GDW) 2015. GDW is a weeklong celebration of diaspora communities and their contributions to global development. It is meant to engage participants across sectors to enable learning and foster collaboration on the topic of diaspora engagement.

In its second year, Global Diaspora Week is proud to boast over 90 events in more than 20 countries worldwide. These events are being self-driven and self-organized by IdEA members for whom diaspora engagement comes not once a year, but every day. Events this GDW range from a Regional Diaspora Economic Forum in Republic of Georgia, to a webinar about a price-comparison platform for remittances that acts like an Orbitz, but for finding the best deals to send money home, to a community-based event in Washington DC focused on how to sustain the global refugee crisis, and everything in between. Looking for some fun during GDW? Join a diaspora day of volunteering or enjoy one of many cultural evenings. With such a large geographic reach and dozens of online events, anyone in the world can participate.

Calvert Foundation will be hosting its own Global Diaspora Week event this Wednesday, October 14th at 1pm EST. Register for our upcoming webinar to learn more about how Calvert Foundation is engaging diaspora communities as investors for development in their countries of heritage.

Secretary of State John F. Kerry, joined the launch event and delivered an inspiring message to the approximately 400 diaspora members, civil society leaders, development workers, government officials, and others. He reminded the audience that America was built by immigrants and that our diversity as a nation is not only a strength, but a “strategic imperative.” For the United States to continue to thrive and contribute to development worldwide, we must embrace our differences and work together to create the change we want to see. Secretary Kerry called special attention to initiatives that enable the diaspora to participate in development back home as investors, citing Calvert Foundation’s India Investment Initiative and newly launched Raíces Initiative.

See the Secretary’s remarks below and don’t forget to check out a GDW event near you!

Our diversity is a strength, not a weakness. And in today’s interconnected world, let me tell you: It is also a strategic imperative. This era requires much more nimble institutions, more agile foreign policy. And part of that agility comes from engaging diaspora communities. And the reasons why are pretty simple.

Our diversity is a strength, not a weakness. And in today’s interconnected world, let me tell you: It is also a strategic imperative.{.blue}

First, we live in a world where the number of people living outside their country of origin has nearly tripled to more than 230 million. The United States has the largest number of diaspora members of any country; more than 60 million Americans are first or second-generation immigrants. And at the same time, we’ve gone from an era where power lived almost exclusively in old establishment hierarchies to an era where power lives in networks, and that is evidence in these objects that are pointing at me, recording all that we are doing. (Laughter.) That’s where power is in today’s world – in smartphones, and iPads, and in people’s ability to communicate 24/7 and be in touch.

Second, diaspora communities are often the prime movers in responding to important events, whether we’re talking about a natural disaster or a terror attack, a financial crisis, or even emerging business opportunities. If something big happens in Ukraine or Japan or Mexico or Israel or Nigeria, the diaspora is going to be talking and thinking about it almost before anybody else. And the 21st century demands a more inclusive foreign policy, and diaspora communities are often the first people to know about an issue and bring it to the attention of people in positions of power. They are often the first to debate an issue or to put out options; they are the first to have an impact on the ground – the most direct and the fastest.

Third, quite simply, in today’s world, partnerships matter. No country – not even the United States – can go it alone. So we depend on our international allies and our partners for a lot, and our diaspora communities can help make those partnerships work. The big reason for that is the leaders of these communities are some of the best cultural ambassadors that we could ask for.

Diaspora communities are also helping to build shared prosperity and empower women entrepreneurs. The U.S.-Pakistan Women’s Council helps to promote small business development in Pakistan. And the Calvert Foundation, together with USAID and the State Department, just launched an initiative that will make it easier for the Indian American diaspora to invest in small and medium-sized businesses back home.

Meanwhile, the State Department is working with our partners to support investment, small businesses, and education in Latin America through the Raíces Initiative, which means roots, and it is appropriate because it is precisely from that kind of effort, from the seeds that are planted by that effort, that prosperity ultimately grows.

We are all connected all the time now. It’s part of what’s made the world smaller and it presses in on people to some degree. But for most people, I think they see the opportunity and they see the benefit of being in touch and staying in touch and communicating the right messages.

So in closing, let me be pretty direct: Immigrants built America. And immigrants continue to make America what it is today. (Applause.) And it is an irony that many people just don’t seem to understand that or be willing to pay respect to our own history. It is precisely the right to be different – in background, race, culture, and tongue – that brings the American people together and makes us one. I repeat: It is the right to be different that defines the United States of America.

And this event, this celebration of diaspora communities and of our diversity is a beautiful and meaningful reflection of that truth.

This celebration of diaspora communities and of our diversity is a beautiful and meaningful reflection of that truth.

To paraphrase Walt Whitman, each of us has a right to take his or her place in the American procession; each has the right to fulfill his or her potential, no matter who they are or how long they’ve been in the country or how much money they have. This is the principle that defines and, most importantly, elevates America, and I am proud that our diaspora communities haven’t just heeded that call – they are leading the charge and living it every single day.

Thank you very much. (Applause.)