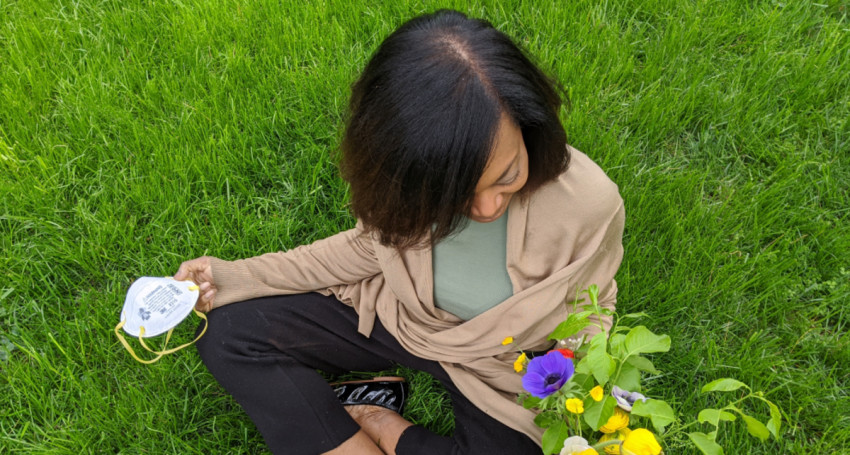 As Chief of Staff at Calvert Impact Capital, I work closely with our CEO and President, and our leadership team to support each business unit to define and achieve their goals. A major part of my role is to ensure that everyone has what they need to do their job and that means working on a range of projects big and small. Especially in the era of COVID-19, I work to create flexibility for our staff so that people can take care of themselves and their family as they continue our work. I often check-in with each of our employees and seek to provide support that transcends the office. I take pride in knowing that I am an open resource for everyone.

It is a privilege to work with thirty-eight professional entrepreneurs at Calvert Impact Capital.

I am most excited by our ability to do truly global work, even though we are a small organization in the social impact space. Our work touches each state in this country and more than 100 countries around the globe. All of our workstreams, including marketing, investor relations, accounting, investments, and risk management, are done in-house by our team of dedicated and passionate professionals.

We were founded with the intention of creating a better world through meaningful investing and this is reflected in how we fulfill our mission in an authentic way every day. I really appreciate the creativity and innovation at Calvert Impact Capital, whether it’s through the Community Investment Note® program, syndications services, or the global partnerships we establish. Our track record is a clear indicator of our commitment to our mission, which has not wavered and it’s part of why so many people entrust us to create social, environmental and financial impact with their investment dollars.

I grew up in the deep South and my family lived fifteen minutes away from where Dr. King was assassinated, so social justice and civil rights were always a large part of our lives. My career trajectory has been largely influenced by my upbringing and my grandparents’ and parents’ life experiences.

My mother was the first black “ready-to-wear buyer” in the South; she worked at a boutique department store and would often travel to showrooms in New York. She told me of designers who would refuse to meet with her once they realized she was black. The white owner of the department store would march into the showrooms with her and proclaim that if the department store were to purchase their garments, Ruby (my mom) would be the one to choose the designs and write the check to buy them. For a Jewish man and a black woman to do that in those times was nothing short of incredible.

My dad’s experiences were no different. As a postal worker, he was always given the most labor-intensive jobs. My family knew what it was like to be treated differently. When Dr. King was assassinated, everyone in my family was devastated. They understood that everything had changed, and the civil rights movement had (and still has) a long way to go.

After college, I was recruited by the Federal government to work for the Department of Justice, where I worked in the Director’s office. I then went on to work for a couple different trade associations, and eventually became President of the American League of Financial Institutions (ALFI), which represented minority-owned savings banks. When I started at ALFI, there were 102 banks. By the time I left, there were only 72 banks. While these community-driven banks were often providing the only source of capital in their communities, new regulations often forced mergers and closings. Other times, big banks would poach the best executives and staff from those banks. In this role I became deeply interested in financial inclusion and community development.

I then transitioned to consulting work and later became Director of the Martin Luther King National Memorial Project Foundation. It was a gift to play a role in the creation of the only Memorial on the national mall to a non-President. The Dr. King Memorial will always hold a special place in my heart. Once the Memorial was constructed and dedicated, our work was done. I then took some time off before I was introduced to what was then Calvert Foundation.

First, I would invite Congressman John Lewis because I've always adored him and have personally known him for about 20 years. He is currently battling cancer and has lived through so much—I would love to have the chance to sit down with him at dinner again.

I would also invite Bryan Stevenson, who leads the Equal Justice Initiative, whose mission is to end mass incarceration, excessive punishment, and racial inequality. He and EJI built the National Memorial for Peace and Justice in Montgomery, Alabama, a national memorial to commemorate the victims of lynching in the United States. I would like to sit down and talk to him because I deeply admire the fortitude with which he approaches his work. It takes a certain strength to confront such a painful history with the grace that he does. I would love to know how he is able to process such difficult experiences.

Finally, I would invite Jacinda Ardern, the Prime Minister of New Zealand, because I am inspired by how she was able to enact legislation banning handguns within six months of a mass shooting. I’m also in awe of how she’s able to lead her country successfully while also prioritizing her family life.

I still read the newspaper every day, including The Washington Post and the Sunday New York Times. I just finished reading Find Me Unafraid by Kennedy Odede and Jessica Posner. It's the story of a couple—Kennedy is Kenyan, and Jessica is an American exchange student—who meet and fall in love. It's a love story, but it's also about two people who sparked a movement to empower girls and the urban poor.

I would also recommend Questlove’s book, Creative Quest, because it’s fascinating to see how he has evolved to become who he is today.