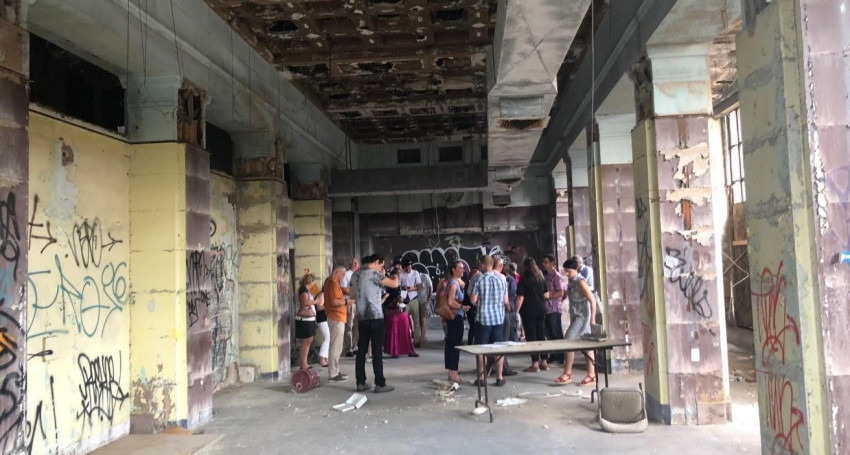 As a new employee on the Investor Relations team at Calvert Impact Capital, I have been learning more each day about how the work we do creates measurable change in communities. Recently, my colleague David Shantz and I visited North Philadelphia to see firsthand how investor dollars can be put to work for local results, visiting several projects supported by our longtime borrower, Reinvestment Fund.

David and I participated in an impact tour led by Impact PHL, an organization whose mission is to increase investment in impact companies and organizations in Greater Philadelphia. The tour was co-hosted by Reinvestment Fund, PIDC Philadelphia, and Calvert Impact Capital. Joined by a group of local investors, we visited several North Philly landmarks, while also hearing from members of the community. Throughout the event, I was struck by the level of thoughtfulness that went into each project, especially around the topics of job creation and career development, preservation and restoration, and community engagement. At every place that we visited, local job creation was a top priority to ensure that long-term investment results in positive, shared community impact. One of the most notable examples of job creation was the restoration project of the Philadelphia Metropolitan Opera House (“the Met”). The Met reopened its doors after almost 10 years of vacancy and has created more than 400 new jobs. Roughly half of these jobs have been filled by residents from the local neighborhood, which has a current unemployment rate of 14%, almost four times the national average unemployment rate.

We also visited Cristo Rey Philadelphia High School, a school financed by Reinvestment Fund and part of the Cristo Rey Network. Cristo Rey schools exclusively serve low-income students and blend rigorous academic preparation with professional work experience to support students in their pursuit of college and careers. Cristo Rey Philadelphia connects students to valuable internships at local companies through the school’s unique work-study model, with the goal to equip students with the academic and professional skillsets necessary to break cycles of poverty.

Another stop on the tour was the legendary Beury Building (see photo above), a 120,000 square foot art deco landmark in the heart of North Philadelphia on North Broad Street. Despite its recognition on the National Register of Historic Places, the Beury Building has been abandoned for over 20 years. Only recently has Shift Capital, a social impact real estate firm, created a plan to reimagine the future of the Beury so that it can remain a landmark building while also providing jobs and resources to the more than 5,500 residents who live within a half mile of the building. While plans for the building are still underway, Shift Capital, a registered B Corporation, spoke about their work to align capital and long-term community success in order to minimize negative impacts of gentrification while positively impacting communities affected by inter-generational poverty. Throughout the tour, we heard from Shalimar Thomas, Executive Director of The North Broad Renaissance, a non-profit working in partnership with community stakeholders to revitalize commerce, communities, and cultures along the North Broad Street corridor in Philadelphia. Thomas stressed the importance of meaningful job and career creation with each project, described the importance of community engagement in each initiative taking place along North Broad Street, and highlighted how The North Board Renaissance is involved in providing consistent communication to city administrators and neighborhood groups.

Our visit to North Philly helped everything I have learned during my first month at Calvert Impact Capital come alive and I am excited to continue the work of connecting investors and communities to create tangible impact.