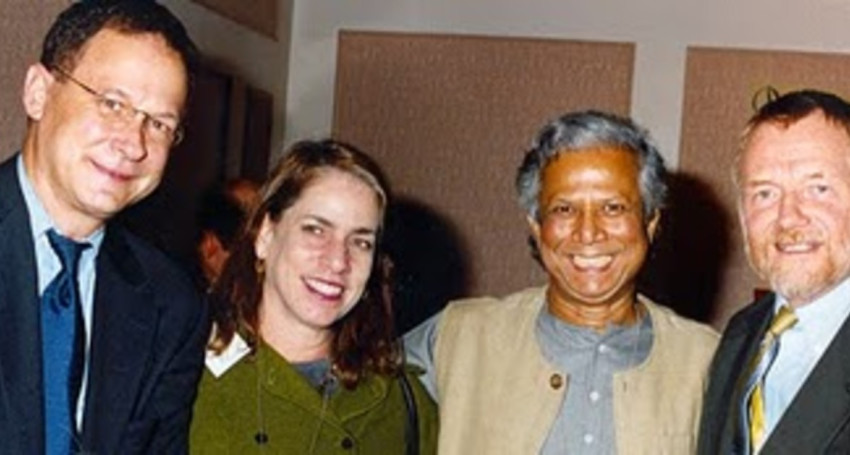 With Shari’s passing on February 7th, an immediate outpouring of love and remembrances filled my inbox from colleagues far and wide. I had the privilege of working closely with Shari for a dozen years as she led Calvert Foundation toward what it has become today: a significant, even iconic, anchor institution bringing high impact investing to the mainstream market.

As we sat looking at each other 18 years ago (I was her first hire), with very few months of operating capital in the bank and $1.5mm in Community Investment Notes raised, she knew from the beginning what we were going to do. Her inveterate optimism and tenacity of spirit strongly inspired me during those early days. Little did we suspect that what we were sure would take three or perhaps five years, would instead take a decade and then some and that the aspirational glimmers in the market system (investors and their wealth advisor apparatus) were…well, just that - aspirational glimmers - that would take a slow burn of almost generational cadence to make the progress we were after. She nurtured it all along the way

Throughout these early years, Shari was fearless, tireless and hungrily in pursuit of a vision she had firmly in mind: that “every investor be a community investor”, and that every financial firm have ready access to a plurality of products, helping ‘on ramp’ all their clients to impact that mattered to them, and mattered to the world. She was clear from the get go about the innovation that we were most firmly about, bringing all those investors (and their families, their companies, their financial advisors) into this changed mindset of ‘re-valuing’investments as something that could have a massive ripple effect as it infused culture and began to change people and institutions.

Every day that we worked together, she took every opportunity to pursue collaboration over throwing up proprietary walls, and she treated everyone she came into contact with as partners and fellow travellers. We were in this together, and we were sticking with it and each other until we got around the obstacles. She taught us how to take strength from the little wins and the certainty of eventual success and to never give up on the core of what we were pursuing.

To Shari’s family, from all of us whom she touched so deeply, and pushed to dream and to do more and faster, know how much she is missed and how much action in the world continues due to her direct and indirect presence in our lives.

Her leading by doing, her extreme collaborative approach and her absolute tenacity of spirit are all gifts that I will carry forward as I continue to work in support of a better world. That’s all she would have asked and that is the best honor we can give to her.

In sadness, but with joy for a life so greatly lived, Tim Freundlich

Tim Freundlich is President and Co-founder of ImpactAssets and has worked with Calvert Foundation in various capacities since 1997. I am looking at a photo of Shari on my home office bulletin board from about 15 years ago. We were at dinner outdoors in Geneva after a World Economic Forum (WEF) Conference on impact investing – not even called that then. She is laughing, a lake in the background. Those of us gathered were not at all of the WEF type and we were saying this was probably as close as we would ever come to that August gathering. Shari raised a toast to “those who know what really counts”.

I really doubt that we would have had the courage to engage in such an audacious plan as the creation of a separately incorporated Everence Community Investments arm without the support and partnership of a recognized leader like Shari and Calvert Foundation. She inspired our work and walked with us—contributing her time and resources to ensure our success. One of my most powerful memories of Shari is when, quite early in our interactions, she invited me into her Bethesda home for dinner and to meet her husband, Jim, and daughter, Moriah, demonstrating so clearly that the professional field I’d joined was not just an “industry,” but a “community” as well.

I knew the thoughtful and purposeful Shari…The community investing catalyst who hammered out definitions with me and many more in the early days, but refused to get stuck there, and always – always – insisted that her colleagues get on to the doing…But most of all I remember her dancing joyfully – breaking the ice at Sustainable, Responsible and Impact Investing Conference in the Rockies, at the Opportunity Collaboration program that honored her in Mexico, and with African women in celebration. This memory is a celebration of who Shari was, and how she blossomed in the many communities she helped blossom – as she so freely shared her too-short life and her love.

I met Shari on my first microfinance consulting engagement in Bangladesh more than 20 years ago. She guided me through negotiations with rickshaw and “baby taxi” drivers, crossing the chaotic streets in Dhaka, crowded ferries, and buying a “shalwar kameez” so we wouldn’t stick out quite as much. She spent her evenings trying to communicate (pre-email) with Jim who she was dating and, happily, later married. Shari knew what she wanted out of life and met challenges head on, diplomatically, without drama, and with persistence. Shari’s commitment and integrity made her an extraordinary professional, while her grace and humility made her a truly special friend.

I first met Shari nearly 20 years ago, at an impromptu group dinner on the last night of the Business for Social Responsibility Conference. Over talk and wine and laughter, I was struck by this woman's knowledge, curiosity, passion and compassion - keenly listening and responding to each person - being fully present. The next day, she and I went shopping in Chinatown for silk slippers for Moriah. I saw her delight in engaging with the shopkeepers, tasting the different foods, finding a gift for her beloved child - being present in each moment. And a number of years later, when I adopted my daughter from China, I felt her presence again - when a pair of silk slippers arrived in the mail.

Rebecca Adamson, Peggy Clark, Terry Moller, Wayne Silby and I conceived of Calvert Foundation, raised some initial funding, and very, very fortunately, in Shari we found the perfect person to make the Foundation a model institution for positive change in the world, and in the process helped create the whole burgeoning field of impact investing. She was unstoppable, if a door was shut in her path, she would find an open window. Shari brought passion, commitment, entrepreneurial drive, and caring to build the Foundation into the successful institution it is today. I thank Shari for the thousands of people around the world that have been given an opportunity for a better life through her good work.

As Shari is Co-Chair of CalvertFoundation, I worked closely with her. Sometimes we would disagree. I was concerned she was putting so many competitors into our business. Also, I wasn't sure about the cutting Tim loose on a sabbatical. But it was Shari's generosity of heart and her basic presence that made me go and trust her judgement. Of course some remarkable results from just those two decisions have shaped the foundation and the world. Working with competitors made us true thought leaders and members of a community and established this space as being that kind of conversation and relationships. And then her intuition that Tim would do something great on his sabbatical - SOCAP/Hubs - (not to mention that the upside we got from this paid his expenses many times over.).

Shari believed in what all the others said was impossible to achieve. From creating the first organization that believed in the power of business to solve social challenges, Partnership for Productivity, to leading Calvert Foundation to mainstream a new asset class of investments to lift the poor out of poverty, to bringing the voices of smallholder African farmers to global trade discussions at USADF, Shari did not believe in lingering long on why things could not get done. This is the Shari I knew—a dreamer, a visionary, a doer. I was blessed to walk the journey with her and to be a part of her life of purpose.

For the Calvert Foundation board in the early 1990s I had the coordinating responsibility for hiring our Executive Director. After the interview with some board members I remember standing on a corner in downtown DC and talking to Shari. It became so crystal clear that she was born to take on the job of bringing Calvert Foundation to life. Not only had she taken the same idea to the Ford Foundation and sought funding for it but she was so genuine in presence that like the the judgment of the rest of our board members who had interviewed her I knew everyone would trust her and want to help her accomplish it. She never made herself important. She made the service she was working to make happen important. It was this genuineness and love of service that had her over twenty years take Calvert Foundation from a million dollars to a billion dollars in loans to make this world a better place. Shari did it with natural love.