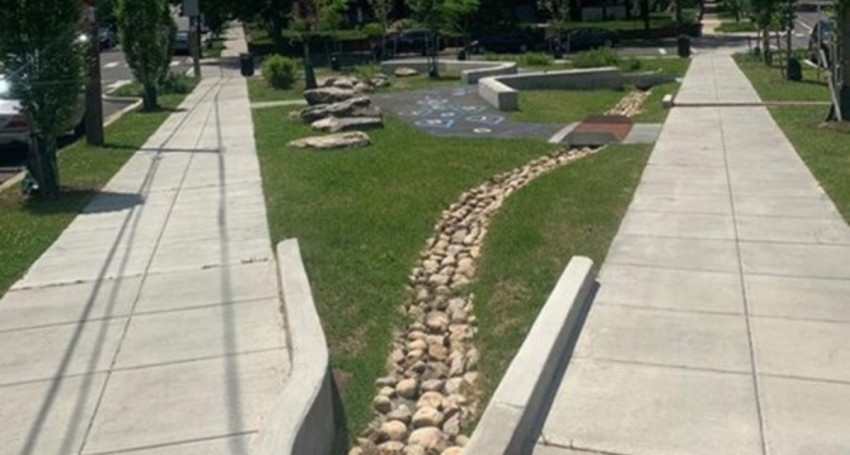 
“The collaborative, cross-sector approach employed to structure and finance the DC Water EIB is exactly what we need to see replicated across the country to address some of our most urgent social and environmental challenges like access to clean water and climate change. This EIB set a high bar for the rigor, transparency, and outcomes-orientation that will be required to shift our financial system to function for the benefit of all stakeholders.”

This deal pioneered the EIB model and was supported by Quantified Ventures, an outcomes-based advisory firm. The EIB was a new type of financial instrument to fund environmental capital projects backed by robust impact measurement and monitoring practices. The $25 million, tax-exempt EIB was sold in a private placement to the Goldman Sachs Urban Investment Group and Calvert Impact Capital. The proceeds of the bond were used to implement green infrastructure practices – such as rain gardens, permeable pavement, and planter boxes – designed to mimic natural processes to absorb and slow surges of storm water during periods of heavy rainfall, reducing the incidence and volume of runoff and combined sewer overflows (CSOs) that pollute the District’s waterways.

CSOs may occur during heavy rainfall when a city has a combined sewer system, which means that the sewer system combines both excess water from storms and sanitary sewage from residences and businesses. During periods of heavy rainfall, flows may exceed the system’s capacity, and regulators installed in the system allow excess water to discharge into local rivers and creeks. This mechanism is necessary to prevent flooding of homes, businesses, and streets, but causes pollution of the area waterways. Approximately 860 communities around the US, serving 40 million people, have combined sewer systems, including the District of Columbia, New York, Philadelphia, and Atlanta.

In 2016, green infrastructure was utilized less frequently and had a shorter track record than traditional “gray infrastructure” practices, such as pipes and tunnels, which are effective but expensive to build. Financing the DC Water EIB through private investment reduced the risk of implementing green infrastructure practices, as the coupon paid to investors was contingent on the efficacy of the green infrastructure. This structure enabled DC Water to pilot this innovative nature-based solution – which was ultimately successful at reducing runoff volumes by nearly 20%, bringing green spaces to DC neighborhoods, and creating green jobs for residents.

The EIB provided financing for DC Water to build a 25-acre green infrastructure pilot with the capacity to capture approximately 650,000 gallons of water annually. This pilot successfully reduced runoff volumes by nearly 20% over the five years, meaning fewer incidents of peak volume in the stormwater system. As a result, less sewage flowed into the District’s rivers and other waterways – a successful outcome even despite much more rainfall and more intense rain events than expected.

“The DC Water EIB was a homerun for the District, its residents, and its investors.” -- Eric Letsinger, CEO of Quantified Ventures

The 20% runoff reduction fell into the “expected outcome” bracket, which meant that the investors did not receive an additional outcome payment, nor did they need to pay a risk share payment. These performance brackets set the outcomes-based terms of the EIB – if the EIB performs within or above expectations, all parties realize a social and environmental return; if the EIB underperforms, this means green infrastructure did not work as well as expected and investors help supplement the costs of the pilot and pay a risk share payment to DC Water. As the EIB performed as expected, all stakeholders – DC Water, investors, and District residents – realized the expected positive social, environmental, and financial impacts of the pilot.

The pilot achieved its expected direct environmental impact performance and enabled DC Water to experiment with different kinds of green infrastructure design and adapt based on what worked best. For example, they learned the most effective designs for permeable pavement, bioretention areas, and rain gardens – which allow rainwater to seep into the ground underneath more naturally – optimizing both environmental impacts and neighborhood needs such as parking and open green space.

The final report on the project noted that “significant information has been learned in terms of design, construction, and monitoring approaches that have added to DC Water’s body of knowledge and expertise related to Green Infrastructure…collectively, the information gained through the performance monitoring and the resulting optimization allowed DC Water to be responsive, make corrections, and ensure a future for green infrastructure at DC Water.”

DC Water will use these findings to build out its green infrastructure plans to include 345 acres, avoiding the costs associated with additional gray infrastructure and bringing greener spaces, cleaner water, and quality jobs to District residents.

For this pilot project, more than 100 candidates were trained for green infrastructure jobs. One graduate, Jerrell Johnson, noted, “The NGICP program was extremely vital to my career growth with my current company. The skills gained from this experience gave me an advantage when educating stakeholders on upcoming and ongoing Green Infrastructure projects.”

The NGICP now operates in 14 states and DC, bringing the benefits of green infrastructure – and the jobs it supports – to communities across the US.

How to Apply the EIB’s success to Other Municipalities

The successes and lessons learned from the nation’s first EIB will not only be applied in DC, but across the country. For example, Atlanta, GA, Hampton, VA, and Buffalo, NY, have already issued their own EIBs – structured by DC Water partner Quantified Ventures, who pioneered the model.

David L. Gadis, DC Water’s Chief Executive Officer and General Manager, noted, “Utilities across the country can apply our learnings to their stormwater programs. The information and lessons learned will benefit the entire sector and will inform our future projects as well.”

Calvert Impact Capital was a proud investor in the US’s first Environmental Impact Bond and is excited to see this model replicated in municipalities across the country – leading to better social and environmental outcomes for communities, local economies, and our nation’s waterways.