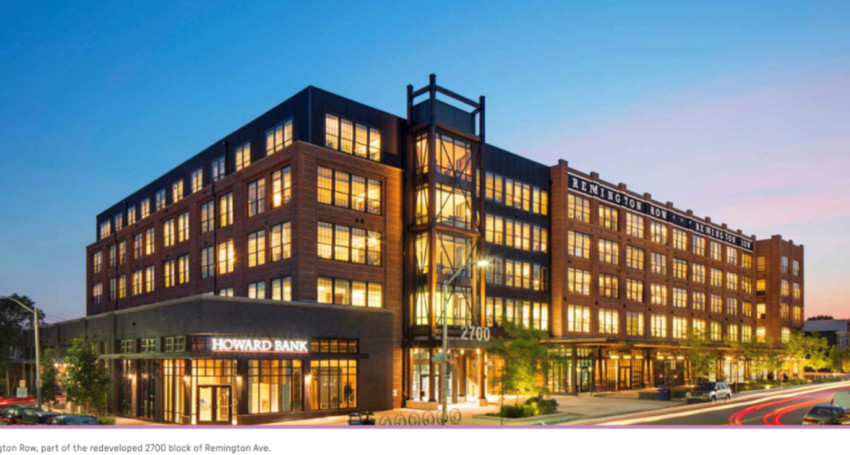 
“The change has been what I’ve welcomed most in all the time I’ve lived here. I remember having a special bus line to take us to Hampden to go to the grocery store because we didn’t have one here. Then Seawall came around and I was like, wow. Now we have ample parking; my doctor is down there [in Remington Row], and I use the pharmacy and the dry cleaners all the time. So yeah, I’m loving life.”

The Remington neighborhood of Baltimore, MD is a thriving community with a main street filled with community amenities. At the center is Remington Row, a mixed-used property with over 100 workforce housing units as well as a pharmacy, doctor’s office, bank, and dry cleaner.

But it wasn’t always this way. For decades, disinvestment in Baltimore’s communities resulted in businesses moving outside the city, leaving a mix of vacant, underutilized warehouses and open industrial yards. In 2008-09, the Greater Remington Improvement Association began community meetings to engage on a neighborhood master plan that would ultimately bring more than $70 million of investment, revitalize the neighborhood without displacing current community members, and ensure community feedback remained an integral part of the work.

The redevelopment of the Remington neighborhood was made possible in large part by Seawall Development Company (Seawall), a developer in the Baltimore area passionate about building an environment that empowers communities and helps launch powerful ideas. Seawall was founded by Thibault Manekin and his father Donald Manekin and is one of the most innovative real estate developers in the Mid-Atlantic region. After Seawall redeveloped housing for teachers and nonprofit workers in the area, community members approached them with a proposal: buy and redevelop four blocks of abandoned warehouse space in Remington and turn it into a walkable urban main street.

Seawall did just that; they bought 17 properties in total and approached Calvert Impact Capital in 2014 to help fill a $2.5 million financing gap for their anchor new development, Remington Row. As Thibault puts it, “We were in a hole, and you guys came in and filled that hole.” Alongside financing from Bank of America, the Low Income Investment Fund (LIIF), and Enterprise Community Partners, Calvert Impact Capital’s loan enabled Seawall to build their first ground up new development, aligned with the neighborhood’s vision.

Calvert Impact Capital played a critical role in the Remington deal, as traditional lenders would not provide capital in the initial stages when perceived risk was high. Our loan was refinanced in 2021 as part of our original plan to catalyze the project and bring in a traditional lender when the project had proven itself bankable.

Seawall’s impact on the Remington community

Calvert Impact Capital was impressed by Seawall’s development philosophy and track record, which was grounded in comprehensive neighborhood redevelopment that included engagement with residents and key stakeholders to give them a voice in development design and retail tenant selection. Seawall’s approach enables community residents to contribute directly to the redevelopment efforts taking place in the neighborhood that they live in and love. In addition to working with the two main neighborhood associations, Thibault met directly with over 100 families. He canvassed the neighborhood every night for six months to meet the neighbors in the 4-block radius, to understand and listen to community needs. He would sit on porches and in living rooms, speaking to community members for hours each night.

This approach paid off. Seawall was able to fulfill the everyday needs of the residents – a bank, a dry cleaner, hair salon, a pharmacy, and parking among many other things. Bringing in a national retailer like Walgreens and anchor institution Johns Hopkins University (JHU), which runs the community outpatient facility on the 2nd floor, allowed them to attract smaller, local retailers and fill the 15,000 sq. ft. of retail space in the mixed-use Remington Row property.

“When Seawall came around talking about what they were doing on Remington Ave., I was very hesitant at first. We were very clear that we wanted to stay in Remington, because many of our employees lived in the neighborhood. I really think that everything that has happened here is for the better.”

By working in phases, Seawall was also able to redevelop an additional 20,000 sq. ft. property to relocate a legacy business, the Baltimore Glass Company, to a better space and remain in the neighborhood, in addition to developing space for another small business and an incubator for JHU undergraduate students. Two other phases included the redevelopment and sale of rowhouses – at cost to public service workers like local teachers – and the opening of R. House, a “launchpad for outstanding food and creating community,” with 10 fully outfitted kitchen stalls for Baltimore chefs, a full-service bar, food hall and event space, and an outdoor beer garden. “R. House and Remington Row were large-scale developments that have changed the trajectory for our organization,” says Thibault.

Seawall also started an effort to create an “Inclusionary District” for the area, where a mission-aligned developer, anchor institution like JHU, and community representatives work together to mitigate against displacement and prioritize community needs such as affordability. An Inclusionary District has a set of “principles to guide how community decisions are made, which projects are supported, how jobs remain local, how to protect legacy residents, and how new ideas are both welcomed and included.”

This idea grew out of Seawall’s acknowledgement that they were so focused on creating beautiful new spaces for the Remington community, that these new community resources had actually started contributing to displacement. As Thibault wrote in his book, Larger Than Yourself, “While it was never our intention, Seawall’s projects had displaced some people. The more vibrant the neighborhood became, the more the living cost increased.” Seawall staff have since tackled that issue head on by taking actions to protect legacy residents, such as serving on neighborhood committees and organizing events to celebrate Remington and its legacy residents, and actively engaging in conversations with the community about how to mitigate gentrification and displacement across all their projects.

As Thibault puts it, “Preserving affordability is important, and that requires a developer to put purpose above profit.”

What we can learn from Seawall’s success

“The project came as a result of listening to the community and what they wanted for their own neighborhood.”

Seawall believes that the community-oriented development approach is very transportable – especially as the next generation of developers leads with purpose over profit, says Thibault. He thinks Seawall’s approach could help bridge the gap between apprehensive communities and new real estate developers who do want to lead with purpose. He outlines the two core values that drive Seawall’s approach:

Outside of Remington Row and R. House, Seawall was selected to redevelop Baltimore’s historic Lexington Market, which was founded in 1782 and is the US’s oldest continuously operating market. Their community-oriented approach, while time-consuming, enabled them to gather community feedback from vendors, patrons, and neighbors over a nine-month period. This community input is being incorporated into the design and plans for operation of Lexington Market, which will include sustainability and clean energy features as well as features that strengthen the neighborhood.

Seawall also emphasizes the importance of working with a diverse set of stakeholders while also looking inward. Seawall acknowledges that, as community-oriented as their work is, their staff used to be very homogenous demographically. Today, Seawall is proud of its DIRE initiatives – diversity, inclusion, anti-racism, and equity – as well as their Black Developer Support Initiative, where they work with aspiring Black developers on project planning, modeling, marketing, property management, connection to capital lending opportunities, and ongoing mentorship. This work is being guided by a DIRE Team made up of Seawall team members from all departments, backgrounds, and perspectives who are committed to being leaders in these areas.

Seawall’s DIRE work also extends to their projects. For example, when planning the Lexington Market project, Seawall knew that a transformed market needed to reflect the diversity of the city, where 60%+ of the population identify as Black. Before redevelopment, less than 5% of retailers in the market were Black-owned. Seawall partnered with organizations across the city with deep community roots to ensure they reach out to businesses beyond their current networks. They received 300 applications for 50 available stalls, even in the height of COVID-19 pandemic. Over 50% of the applications were from Black-owned and women-owned businesses. These results demonstrate that, as Thibault puts it, “Successful projects have diversity as their core.”

Calvert Impact Capital is proud to have supported Seawall and the Remington neighborhood and is excited to see the community and local businesses continue to thrive.

More on Remington Row and Seawall’s commitment to empowering communities can be read in Thibault Manekin’s his latest book, Larger Than Yourself, wherein Thibault talks about his journey – from living in South Africa building the organization PeacePlayers, to his journey back home to Baltimore, where he began Seawall with his father.