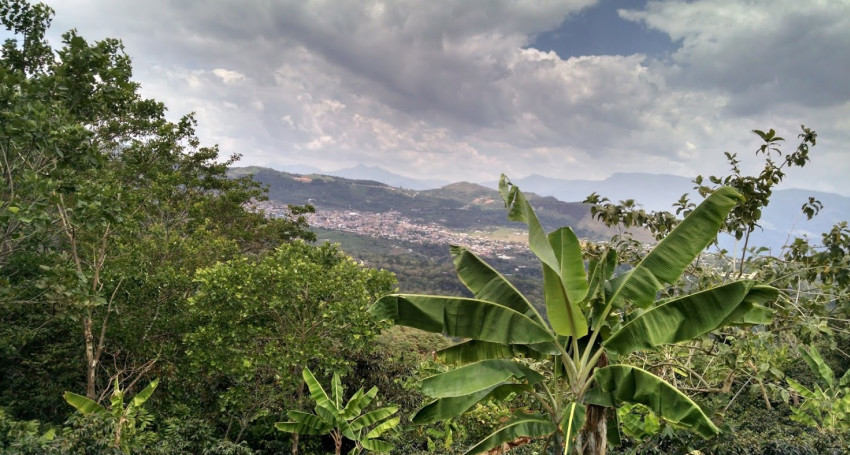 A view of the town of San Ignacio from the mountains.

Two weeks ago I visited two coffee cooperatives in Peru who Calvert Foundation has financed.

The Unión de Cafetaleros Ecológicos (UNICAFEC) and the Cooperativa Agraria Cafetalera Frontera (FRONTERA) are both based in San Ignacio, Peru, about 25 miles from the Ecuadorian border.

FRONTERA was one of the first cooperatives in the area, founded to bypass intermediaries who were profiting from the low prices at which coffee farmers were selling their product. The current general manager's parents were among the founders.

FRONTERA currently has 331 members, who on average have three hectares of land each. Most of the land is dedicated to coffee production, with some space for subsistence crops like plantain and corn.

The cooperative has a 25-hectare coffee farm and processing plant. They have several different varieties of coffee planted: Caturri, Catimor, and a few trees of the Gesha variety (which is rare and sells at a very high price). Their processing plant takes the coffee through the first stages of processing, which are removing (pulping) the cherry from the coffee beans, then washing the coffee to remove the mucilage layer surrounding the bean. Then the beans are dried either outside on the patio, or indoors if it rains.

Investors have already invested about $25,000 in fair trade cooperatives. Their dollars are financing cooperatives like FRONTERA and UNICAFEC, while earning returns. Invest in Fair Trade

FRONTERA also has a processing plant in Chiclayo where the coffee is given a final drying, and the parchment is removed from the bean. There the coffee is graded and packed for shipment to the buyer. The processing plant has been a key source of revenue for FRONTERA because they offer processing services to 23 other exporters, in addition to processing their own farmers' coffee. They leveraged financing from Alterfin to acquire the plant, and further financing from Root Capital to upgrade and expand their equipment. Last year they processed 19,000 quintales (hundred pounds), from their own producers, and expect to process a total of 130,000 quintales from their own farmers and others this year.

In addition to the coffee processing services they provide to members, FRONTERA offers credit to its socios to cover their pre-harvest investment costs (labor and living), for health-related expenses, and for fertilization of their farms.

FRONTERA has been affected in the past by the increase in production from Brazil. There, the coffee industry uses greater mechanization to cultivate coffee, leading to higher yields and lower prices. Additionally, the coffee rust plague hit San Ignacio hard in 2011, wiping out much of the farmers' crops. Coop members have begun planting more of the Catimor variety, which is more resistant to the plague. The coop is also focused on improving quality to reach better paying buyers, and developing finished products to keep more of the value within their community.

They have coffees rated as high as 86 points, based on a standard scale that measures various characteristics including aroma, flavor, body and acidity. Some of the ways they are adding value include offering roasted and ground coffee and making coffee liqueurs (they're tasty). The Unión de Cafetaleros Ecológicos (UNICAFEC) formed in 2001 with 100 members, and now have more than 400 members in the cooperative. Like FRONTERA, they've been working with Alterfin and Root Capital since 2005 on a variety of projects.

Each farmer has about three hectares, and they deliver their coffee to the UNICAFEC processing plan in San Ignacio already dried or semi-dry. The price paid to farmers is based partially on the humidity level at which they deliver the coffee. Farmers mostly have their own pulping equipment, washing station and drying facilities at their homes. Out of the 400 UNICAFEC members, 100 are female. Since they were founded, they've exported 13,000 quintales per year on average, but their productivity is improving thanks to organic fertilizer and technical training.

Climate change is one of the key challenges that the cooperative leadership described.

Climate change is one of the key challenge that the coop leadership described. Before about 10 years ago there was a defined wet season and a dry season, which determined when the coffee trees would produce. Now they see rain and sun mixed together throughout the year, which makes production less consistent. Additionally, the warmer temperatures means that coffee at higher elevations is maturing now at the same time as coffees at lower elevations, which means that there is a shortage of labor. Before, farmers at higher elevations would help those at lower elevations harvest their crop as the harvest moved up the mountains, and vice versa.

UNICAFEC's members have been affected by the coffee rust as well. In response, in 2011 they started a pilot project with 50 farmers to plant the Catimor variety of coffee, totaling 70 ha. Financed by Root Capital, the project is now expanding to other producers.

A key service that the coop provides is coaching members through the process of organic certification. This leads to higher prices and more income for farmers. Since 2008 they’ve been offering health trainings for the wives of coop farmers, offering pre-harvest credit to farmers, and credit for home improvements.

FRONTERA and UNICAFEC are impressive examples of the power of collective effort. I came away with a deeper appreciation of the level of effort required to produce a single cup of morning joe.

Check out more photos from the trip, and if you haven't already, make an investment to fund Fair Trade cooperatives.